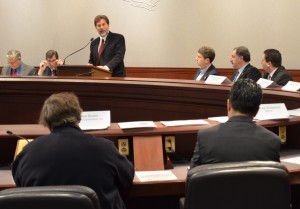 The Connecticut Hydrogen-Fuel Cell Coalition is made up of companies and organizations that do business with each other and/or have common needs for talent, technology, and infrastructure. Connecticut companies now lead the world in the development of  molten carbonate and phosphoric acid fuel cells and are among the leaders in proton exchange membrane (PEM) and other electrochemical technology applications. Connecticut companies in hydrogen generation are leaders in both proton exchange membrane electrolysis systems and in converting natural gas or petroleum products to hydrogen through reforming processes.

Connecticut companies pioneered the development and application of fuel cells and hydrogen generation, and continue to lead the world with a broad infrastructure of original equipment manufacturers, suppliers, academic support, state government support, and regional activity. The Connecticut Hydrogen-Fuel Cell Coalition is supported by the Connecticut Department of Economic and Community Development and its members.

For more information regarding the Connecticut Hydrogen-Fuel Cell Coalition or the CCAT Energy Program
Click HERE
or contact Joel M. Rinebold Ph.D. at 860.291.8832.